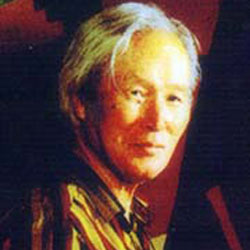 Brief History of the Artist

The works of Jeon Hyuk-lim

Concern in Korean culture and image of his birthplace

The most prominent trait of his entire works of 60 years is that the titles of his works commenced from his affection and interest on traditional culture of Korea. From his initial ceramic works in which demonstrates all kinds of utensils that appear traditional and fundamental form, pattern and object, furthermore, elements of brilliant colors that was affected by red and blue are very direct traits that suggest viewers about what is at the core of his interest. And his inanimate objects show structure of object as if looking at a a paining of flowers and birds, a folktale or pictures from the Joseon period. The kind of conscious supports how we should explore the formative method on works about our culture.

In many of his works shows title "birthplace". Jeon Hyuk-lim lived in Tongyeong , Busan and Masan like a lighthouse and like local fixture for decades. That is why there are overwhelming many backgrounds of sea in his works. For the sea he wanted to express, he didn't need the outer layer of sea that is interpreted as billowy wave. We can see that he woven scenery of the sea through blue color which is the color of sea. Perhaps it was possible for me to express metaphorically because he didn't wanted to express the sea in realism technique.

Since impression that was given by nature is his assignment to express as a painter he probably is expressing it in the means of the most effective and powerful method. In the same vain, even if his works seem a little abstractive or figurative, he wouldn't want to be called as a figurative painter.

Exploration on abstracted pure formative art and impression he received from the sea in his hometown, his interest in our traditional culture were the primary factor in determining his works. This also applies to his later abstractive view as well. In the later works of his, they could be interpreted that he reflected his own unique formative experiment, not dichotomy logic such as figurative and abstractive in western art. He created his own formative language by transforming, dismantling and assembling many objects in order to express what he felt from nature or pattern/shape latent in his heart.

A magician of colors

Commonly, the most important trait in evaluating Jeon Hyuk-lim's paints is coloring.

He recognized colors of objects under the colorful sun of Namdo. We could feel a new feeling about nature or on an object through colors led by Jeon Hyuk-limi in expressing the feeling. He makes us to fantasize and let us dream something surreal. He would definitely know the ventilation effect of his imagination through the colors he organized and he doesn't try to hid his intention in recent paints. His works concentrated on natural features and fantasy of Korea on recent works is the good example.

Jeon Hyuk-lim uses colors as a point of contact between the world that surround him and his thinking. His precise colors (Blue, Red, Yellow, White and Green) that explains his works represents beyond nature. The structure of colors is the issue.

We can see a unique coloring in each paint, and that becomes a clue dominates other areas. The wonderful coloring combination derives principal of combination that forms organic display.

His initial works show colorful display, harmonizing with small brushing that induces changes of subtle coloring but the recent works filters out only the precise colors. This kind of coloring ability would be a case that was greatly influenced by our traditional culture. He often said he was fascinated by the colors that he found from folktales and paintings

As the vivid colors that we realized in our memory are expressed on display, the colors that gush out from his figurative world are not totally new but are actually very familiar.

His works can be found at